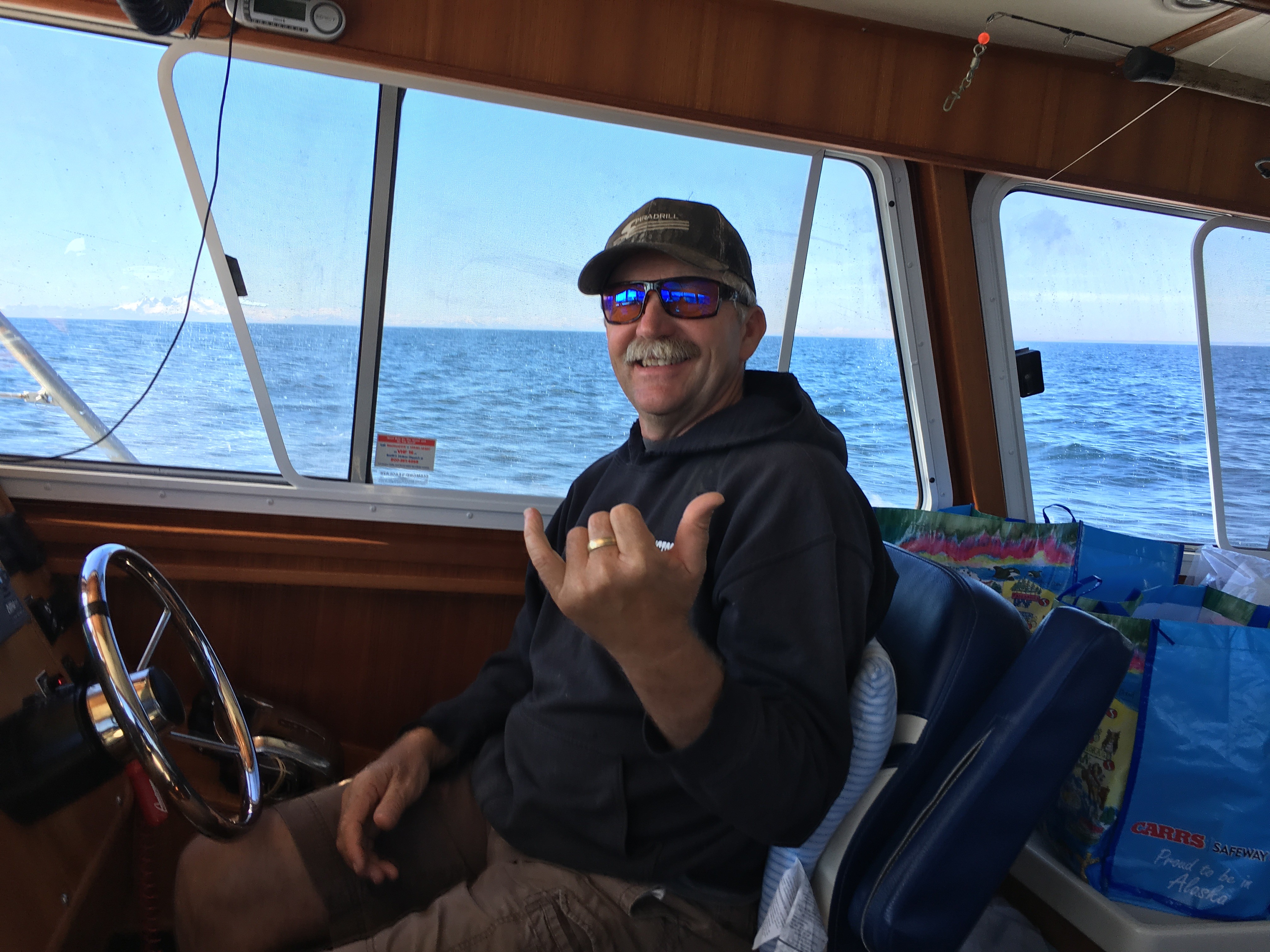 Spent the 1st night at Cape Douglass across cook inlet. I had never been there , pretty desolate and unprotected bay but the W peak was pretty cool. Headed across Shelikof strait to Shuyak island and dropped anchor in
Shangin bay. 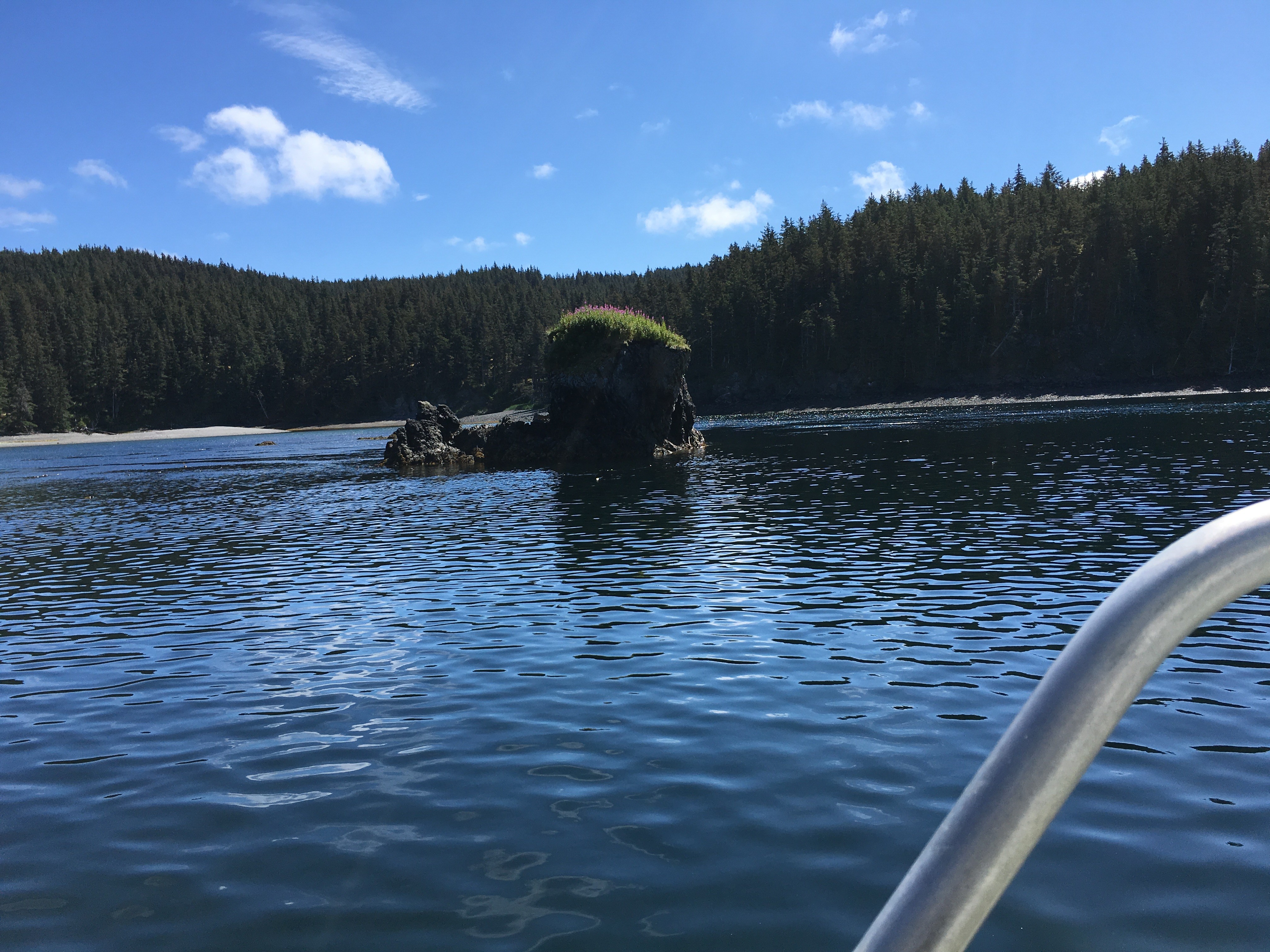 After checking the weather it was looking rough for a few days so instead of my original plan to fish and check out the bay my wife said she wanted to go to town so I pulled anchor and headed for Kodiak city. coming through Marmot strait the whales and birds were thick but being late in the day I didn't stop to fish and headed on down to the Emerald Island.Pulled into St Pauls harbor after a bumpy ride across Marmot bay. Kodiak is an awesome place I always feel at home there. Met Dave the Captain of fish and chips charters and he talked me in to helping him a couple days as a deck hand so his wife could take a break. I never wanted to be a fishing guide but I had a blast helping people catch fish and ended up helping him 4 days. In Kodiak you don't have to go far to get into good fishing, we had whales all around us while Salmon fishing. 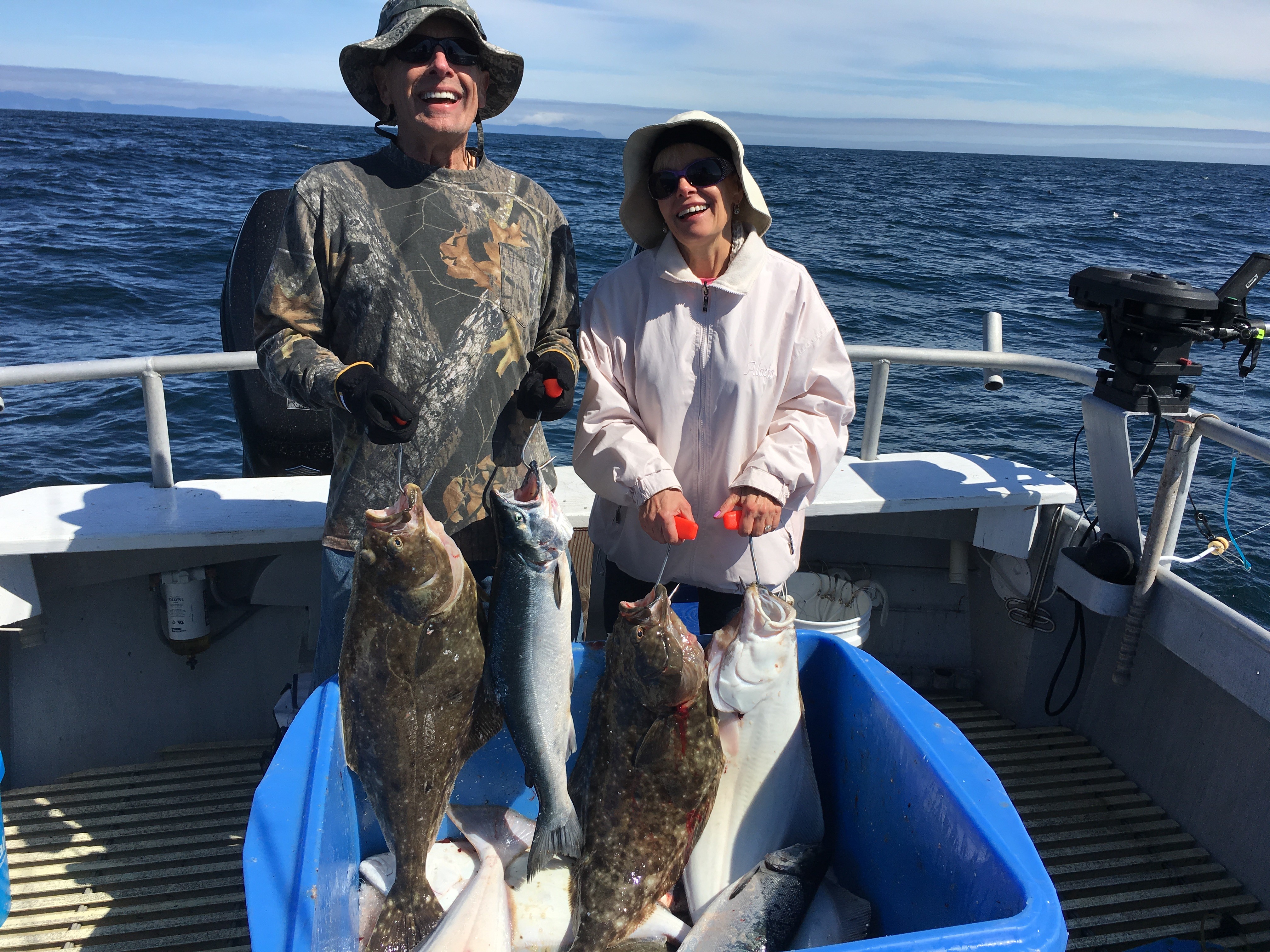 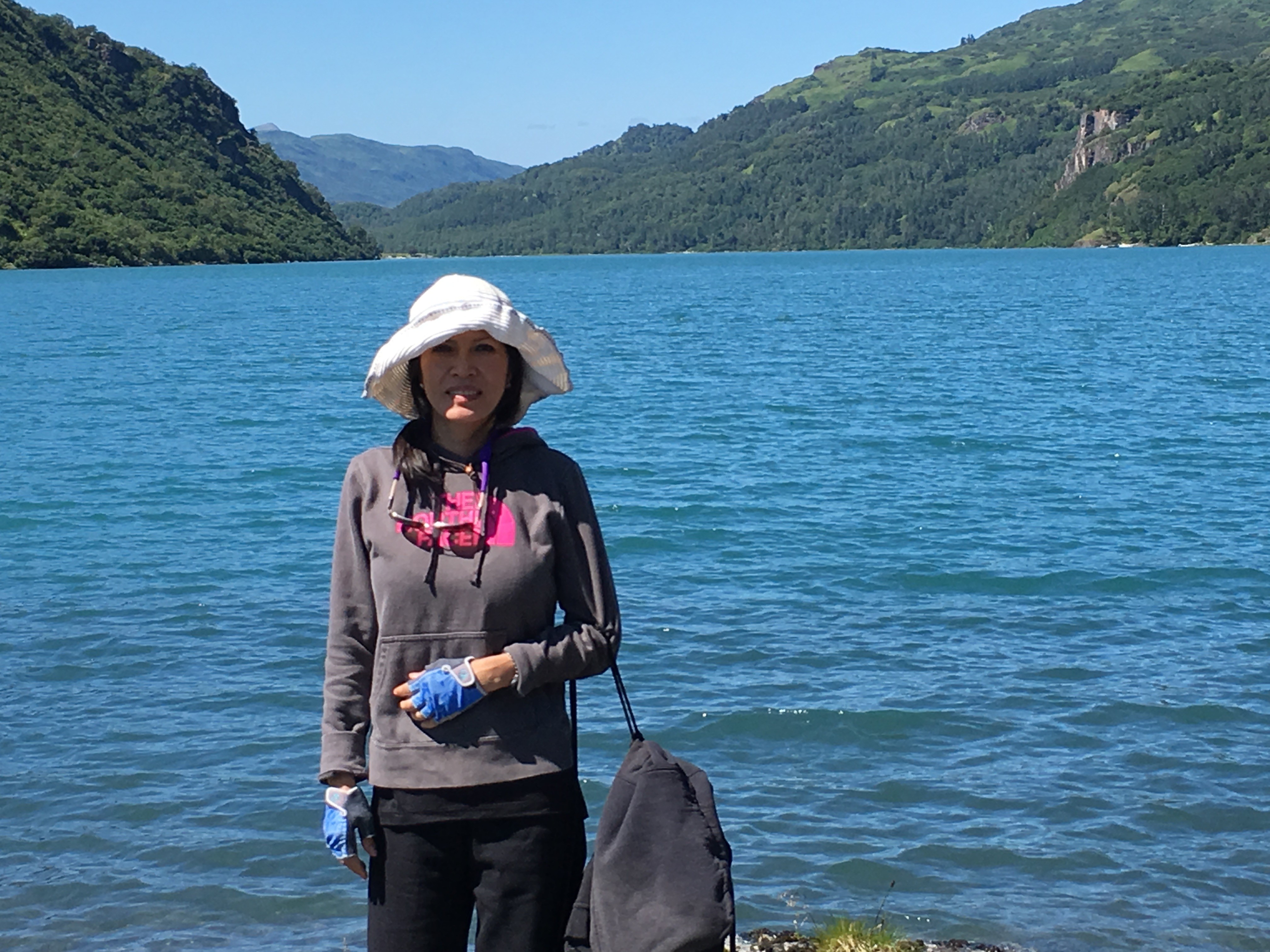 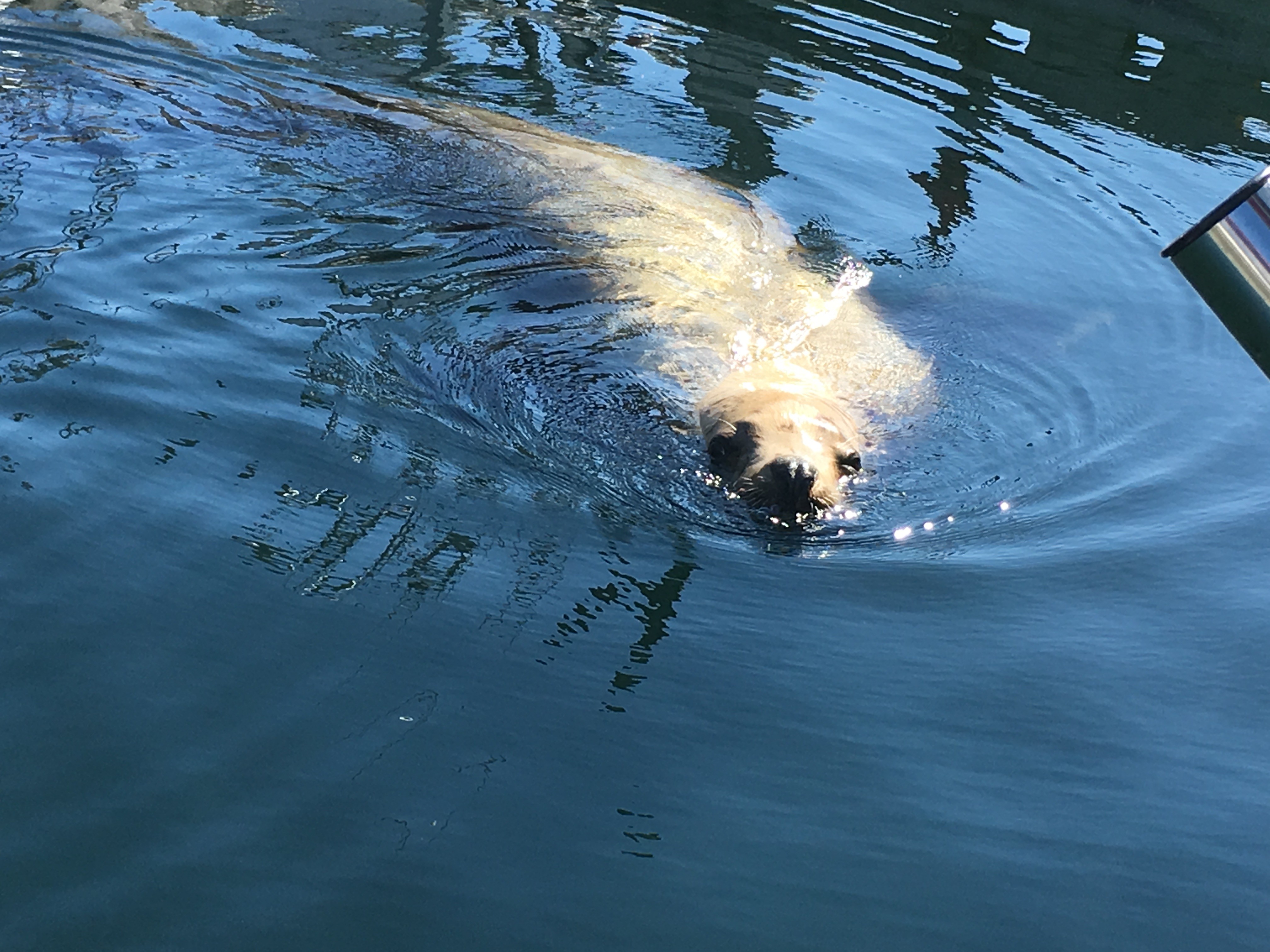 Sea lion in the harbor. This guy didn't notice he had an Irish lord on his jig until a Halibut decided to make a meal out of it. 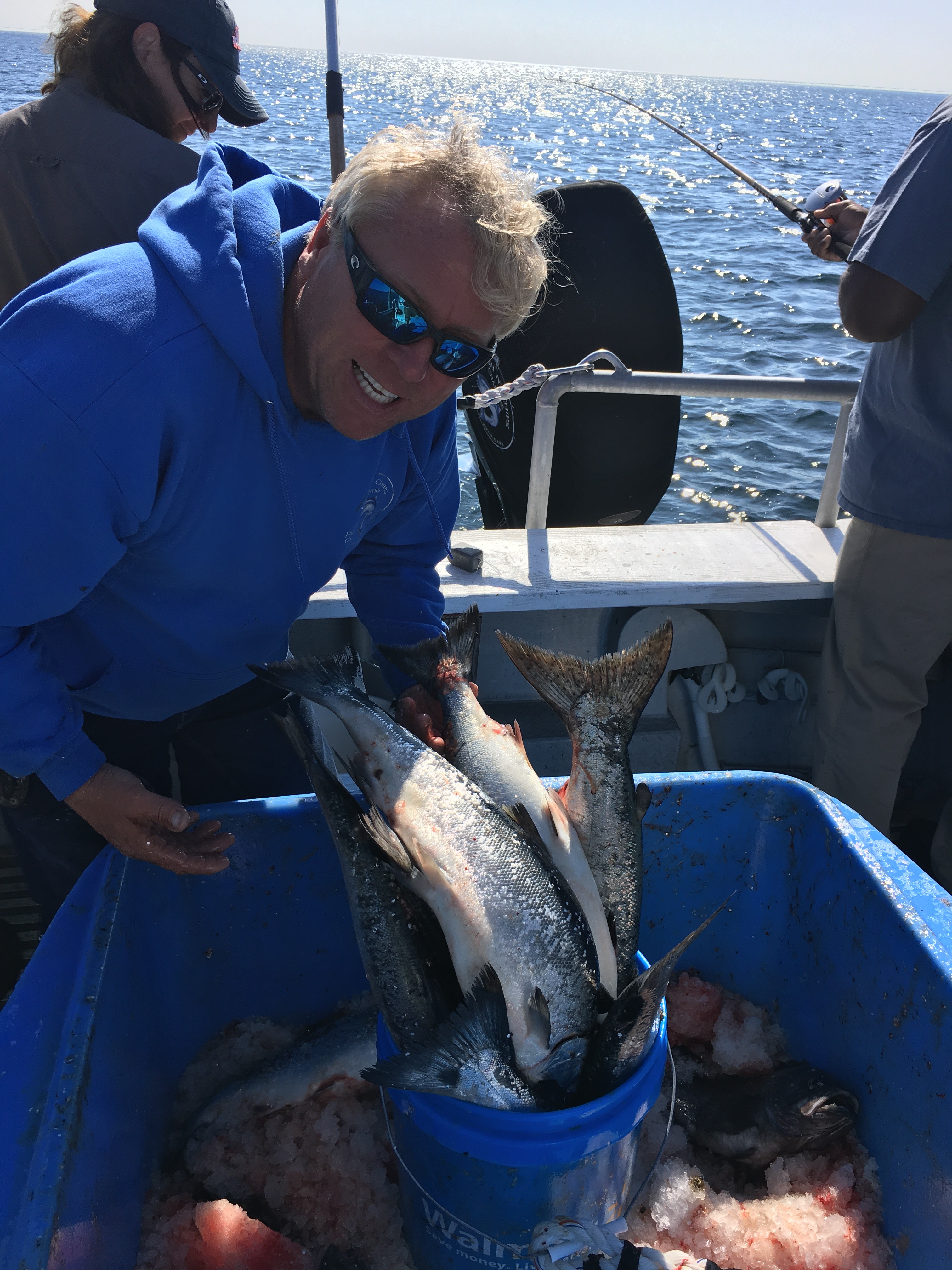 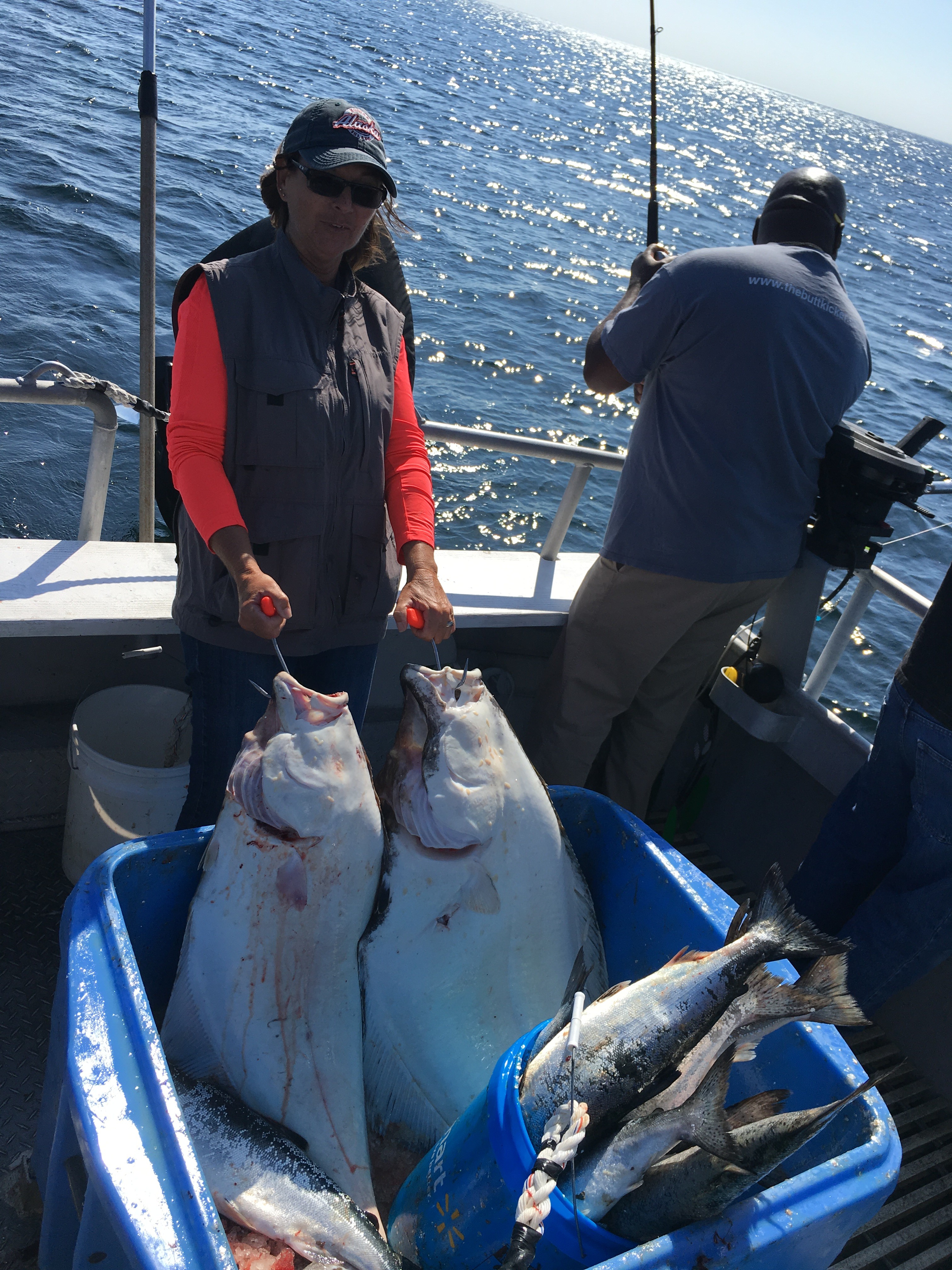 Kramer, who fishes Walleye tournaments on lake Erie sent me some of his special jigs he makes. 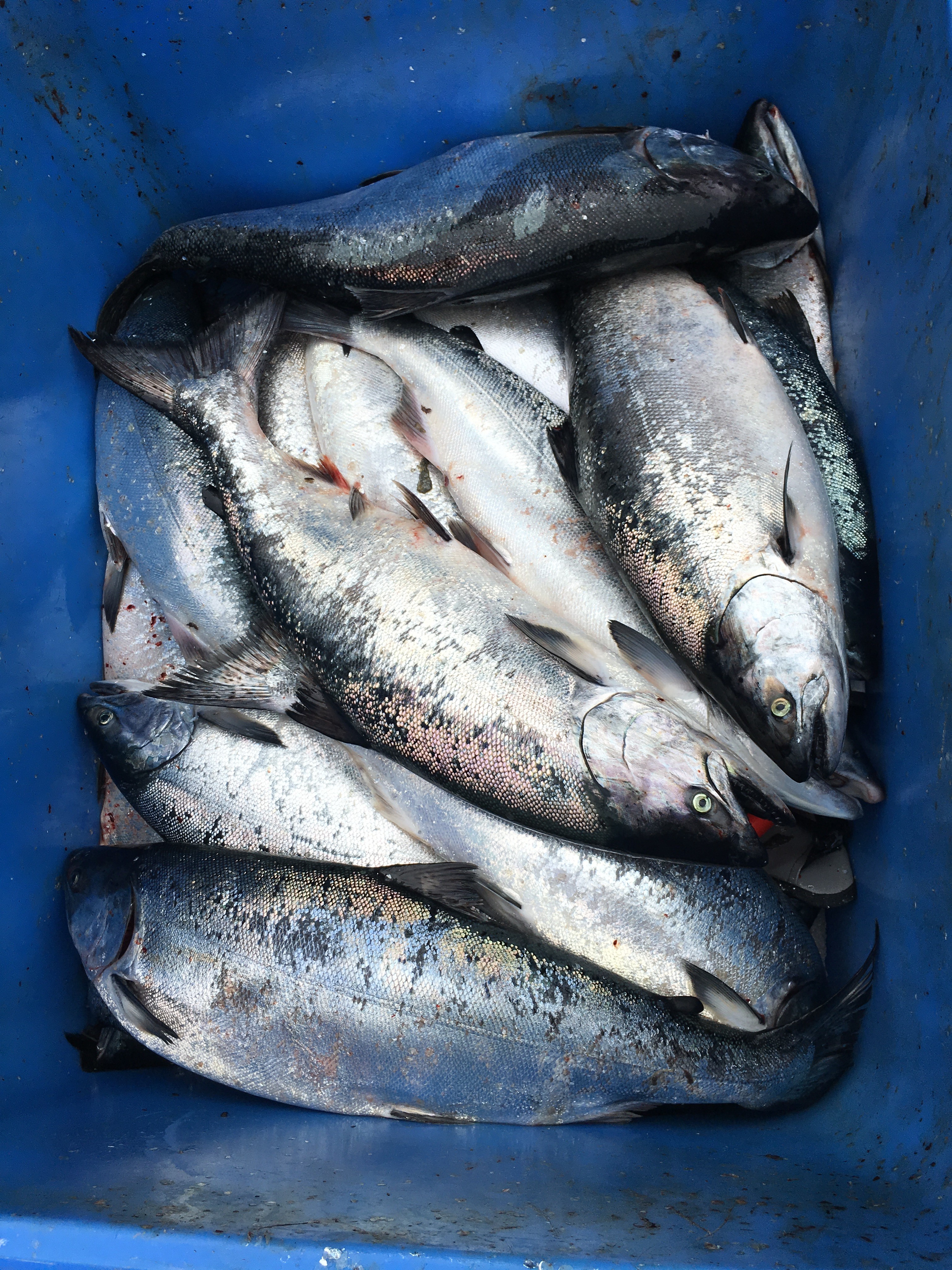 What a blast I had meeting new friends from all over. Dave wanted me to keep helping him as we were a great team but after 4 days I had to take a break and did some berry picking. 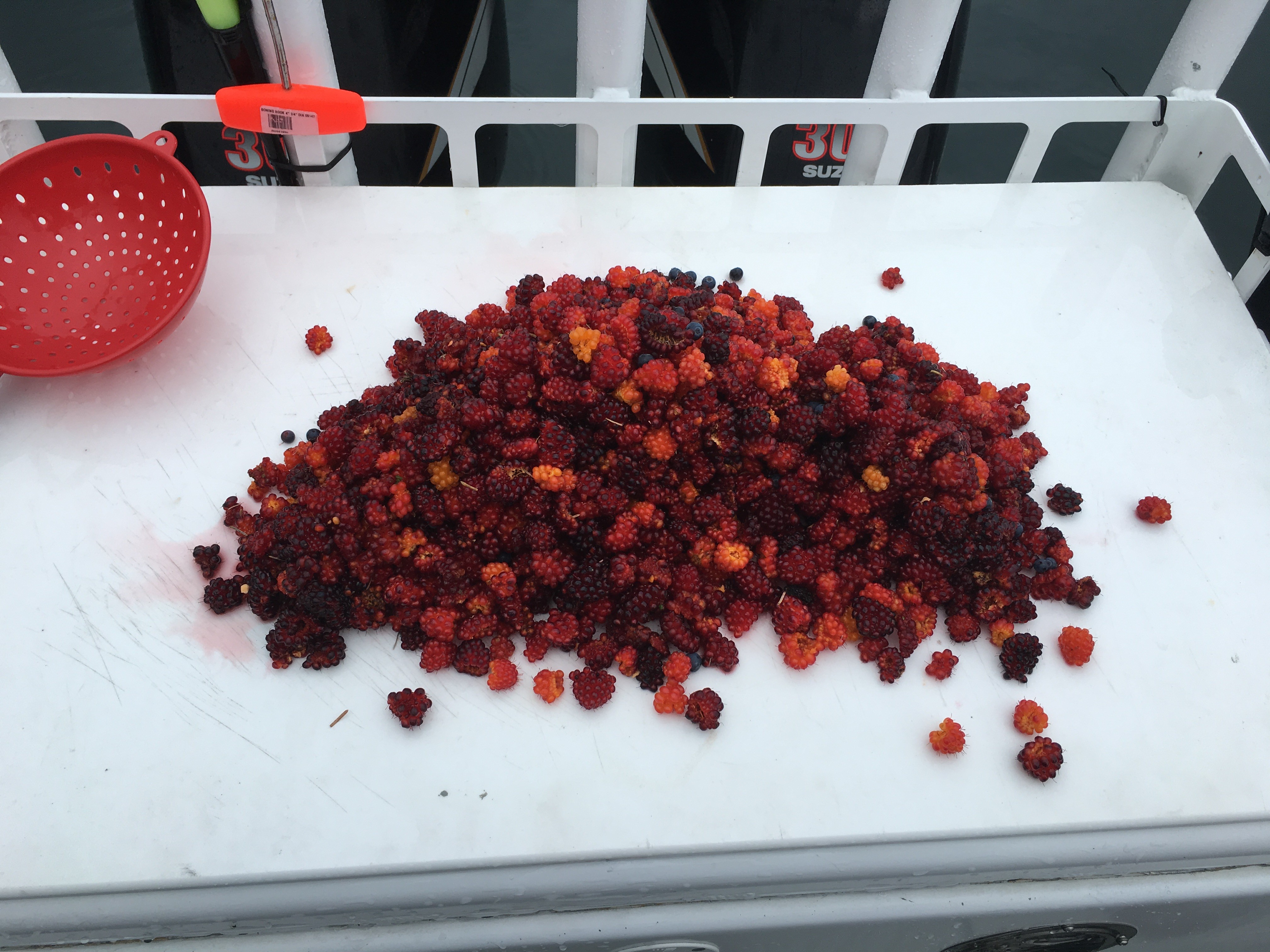 Ended up in Kodiak over 2 weeks waiting out a west wind pattern but what a great place to be stuck.
Headed out with some rough weather heading north so I headed west through whale pass and Krupenoff strait to Shelikof. As soon as we turned the corner into Shelikoff Strait we hit rough water from the North, Van wanted to turn around so we spent the night in Onion bay. The next morning we tried it again and worked our way straight into a NW wind up to the North end of Afognak Island to Blue fox bay where we dropped anchor in a beautiful spot behind Bear island. I dropped the skiff and we went out exploring and met some new friends that have a lodge on Hog Island. 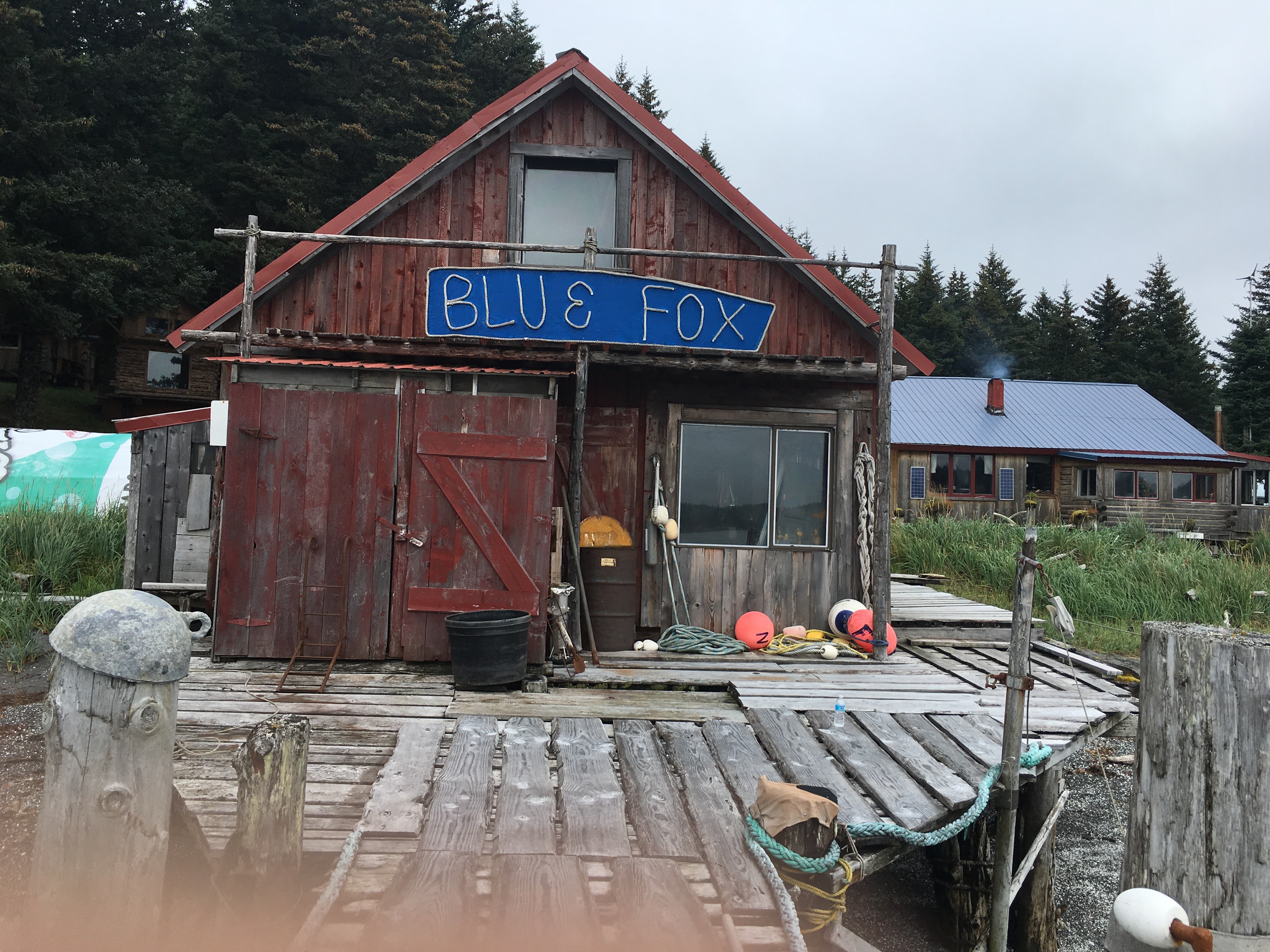 While picking Blueberries I heard a loud crashing through the bushes and stood up to sea a very large Brown Bear coming straight at us I hollered "hey bear" as i pulled out a flare and he changed direction but never slowed down. That ended the Berry picking that day.
The weather report changed so we stayed an extra day as they were calling for a small craft advisory 30knot winds and 8'seas but the next day sounded good but later found out the storm stalled out and was flat all the way across so we missed our window and low on supplies headed out the next morning early. The forecast was late one day and changed again so I went ahead and crossed the Barrens thinking I could outrun the wind but ended up in some pretty rough uncomfortable seas for half the day as Van sat in the corner praying!!
It stayed rough all the way back until we came into Kachemak bay and pulled into the Harbor about 3 weeks after leaving. Next time she wants to fly. Had a rest day and back to fishing.

http://imagizer.imageshack.us/v2/xq90/923/Y9kiqS.jpg[/IMG]Dennis and Tanya with a King. 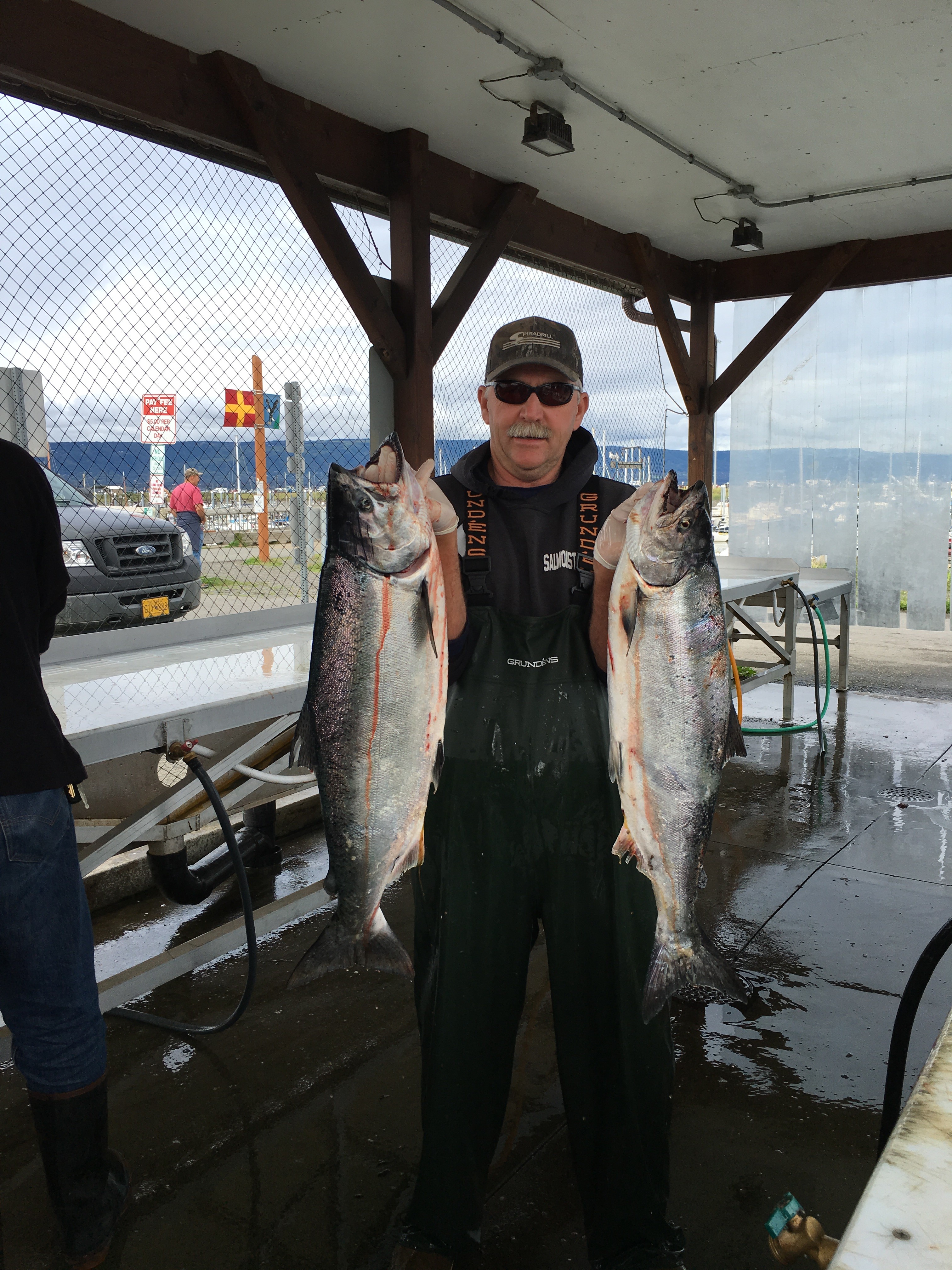 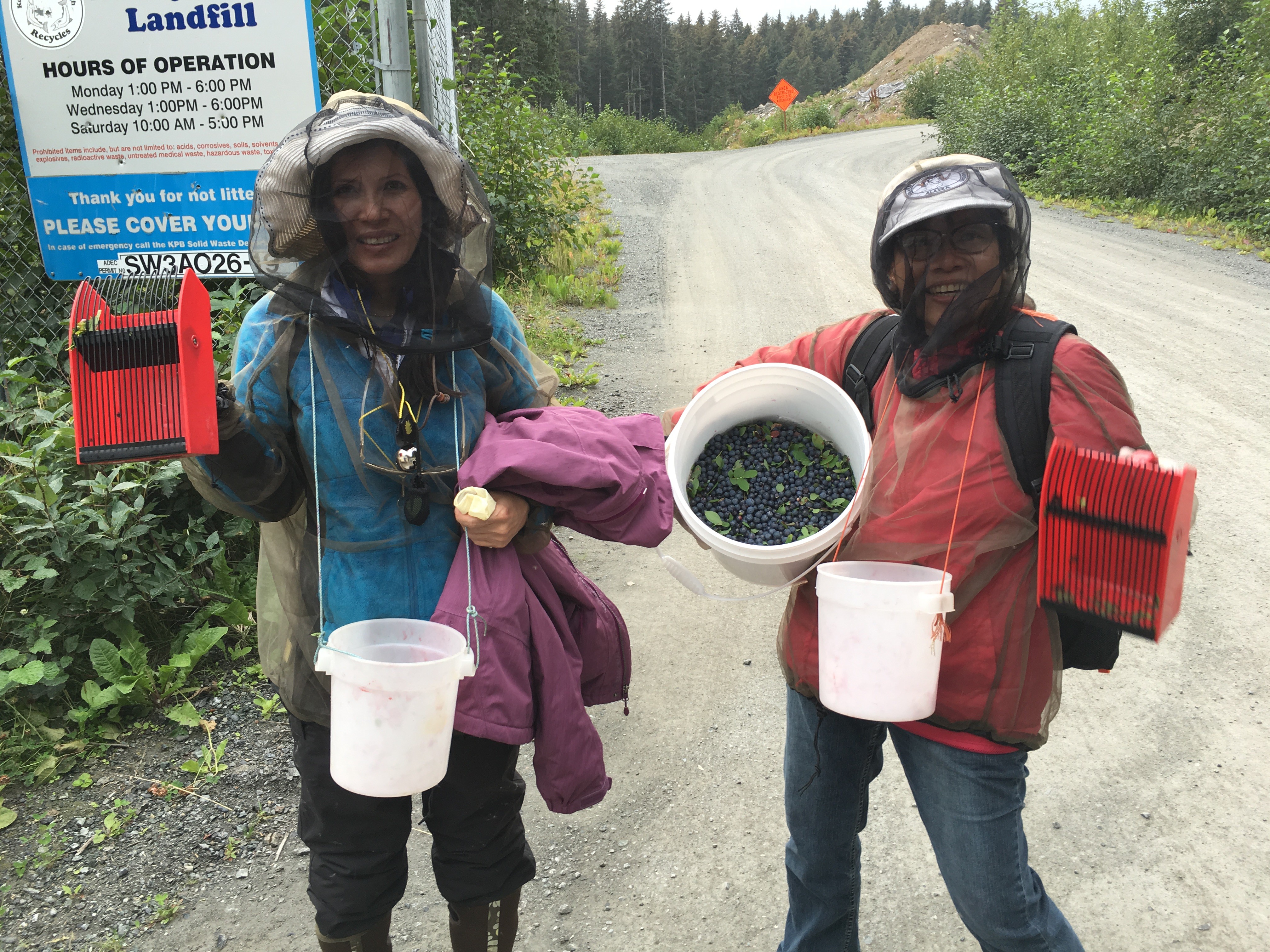 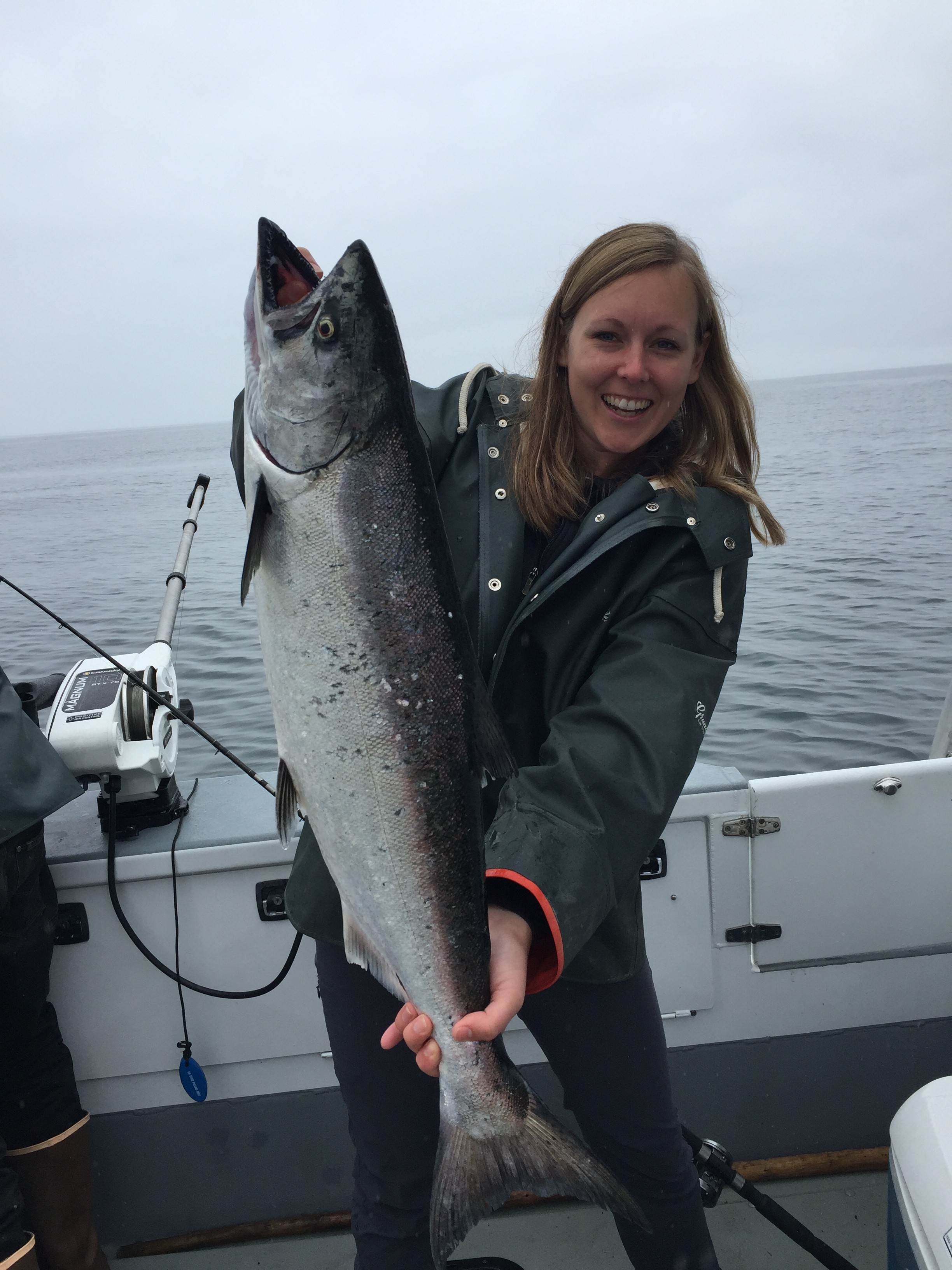 Ashley with a King and my nephew Brendan with a Silver 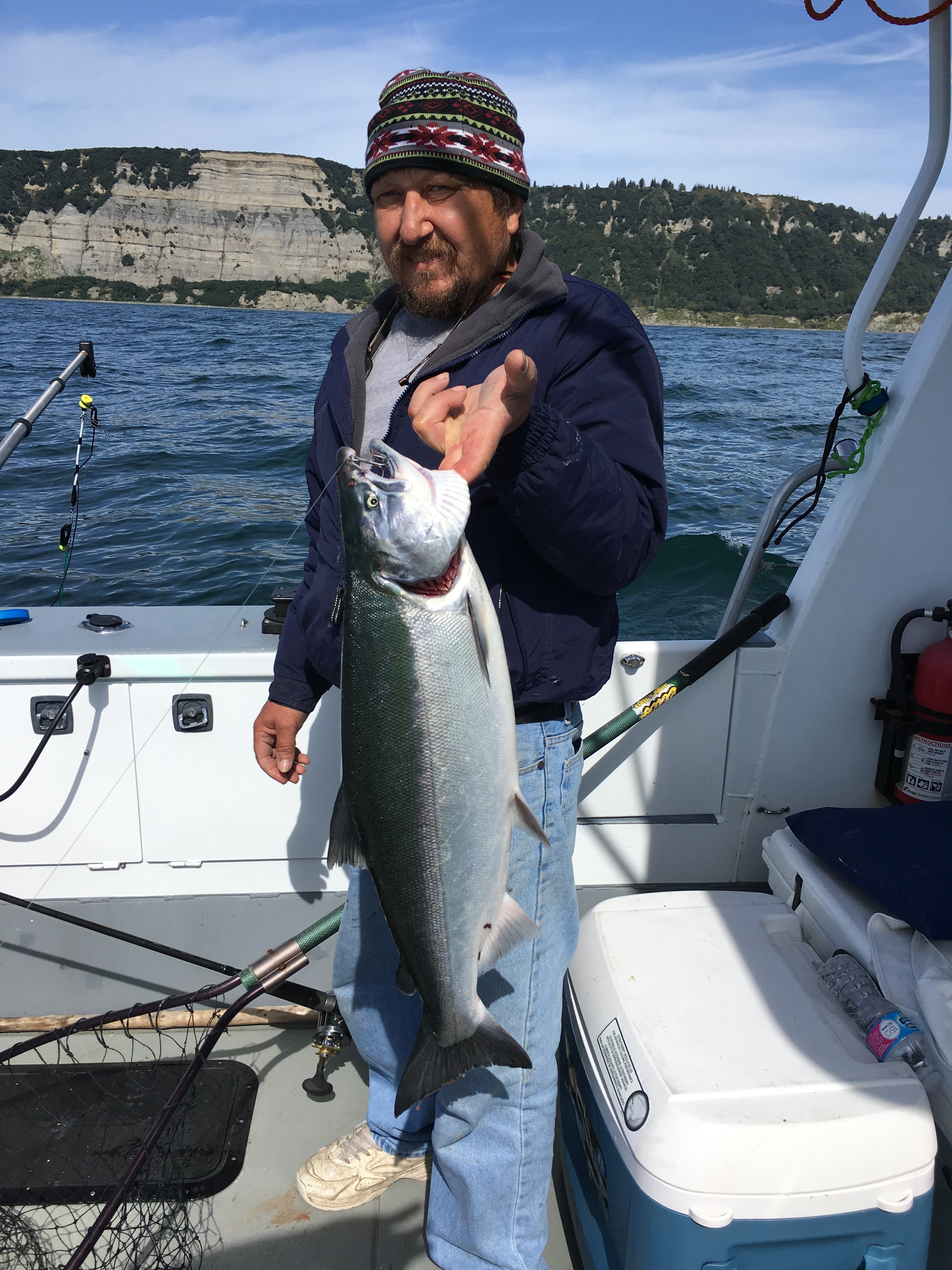 Ivan with a Silver.

It's been a great summer so far.

dam looks like Van takes blue berry picking serious, interesting looking blue berry picking boxes. Good to see Ivans out fishing, loved his storys about catching tigers in Russia as a youth, awesome guy. Glad to see your having an epic summer, I'm extremely jealous! I will send you my address just in case your have a few extra kings! lol
Z

Joined Apr 11, 2007
·
2,013 Posts
Shuyak island? Damn Capt, you have it all!!:biggrin1::biggrin1:
Looks and sounds like good times, for the most part. 8' swells, Grizzly Bear, waiting 2 weeks for the weather. You're defiantly living it!
Keep the pics and stories coming!
J

This is an older thread, you may not receive a response, and could be reviving an old thread. Please consider creating a new thread.